Celebrating 25 Years with a Look Into Our History 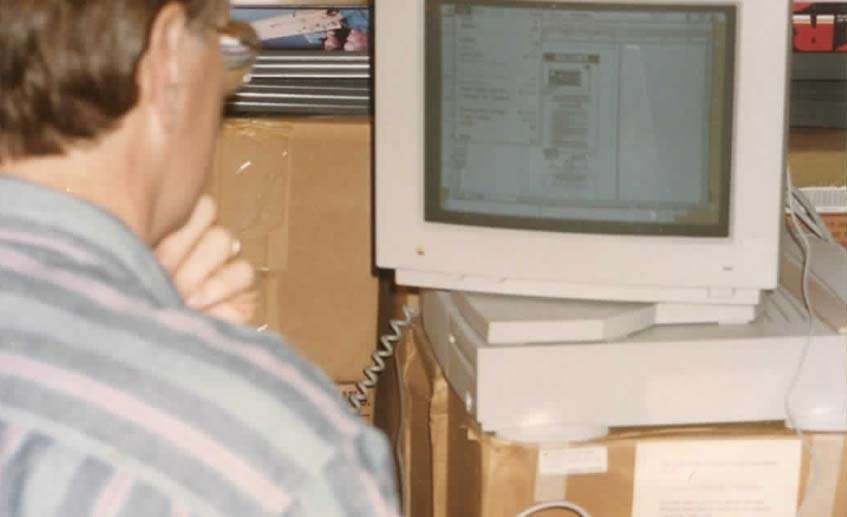 In the mid-1980s the printing industry was revolutionized by the introduction of the Apple Macintosh personal computer and Aldus PageMaker software. These systems allowed the output of digital pages as film on high-resolution imagesetters, and they also offered the means of making color separations on the desktop.

At that very time RT Marketing inc.’s founder, Dr. Robert Kraay, arrived at Lenoir-Rhyne University in Hickory, NC, as an associate professor teaching courses in journalism, public relations, communication and photography. Robert purchased a Macintosh personal computer and taught himself to use it. He quickly brought LRU’s journalism students up-to-speed as he introduced them to desktop publishing.

The possibilities for desktop publishing were very exciting! In 1989, Robert decided to start his own desktop publishing company, setting up shop in his living room. One of his very first products was developed together with his friend, Jim Edwards, a remodeler who wanted to print and mail newsletters to his modest list of clients, but could not afford the per piece price.

Robert designed a template for a four-page, two-color, customizable newsletter called Remodeling Tips that could be mailed out by multiple non-competing contractors across the country, thereby reaching the quantities that would reduce the per piece price. He also wrote general interest articles that would appear in each subscriber’s version of the newsletter, while all the subscribers would supply a custom article that would appear only in their individual versions.

Robert and Jim marketed their innovative idea in their booth at the Remodeling Show and the International Builders Show (IBS). Some of the very first remodelers who caught the vision of how Remodeling Tips could benefit their company are still happy and successful clients of RT Marketing inc. One of those clients, Mark Stephenson of HUB Design/Build, began using Remodeling Tips in 1997, and today is the new Sales Manager for RT Marketing!

In the mid-1990s, as the internet again revolutionized the business world, Robert was once more at the forefront of technology. His company—at that time known as RT Incorporated—began providing state-of-the art websites for clients who knew us through the newsletter and from the trade shows.

In 2000, Robert was hired as Executive Officer of the Home Builders Association of Hickory-Catawba Valley, a position he thoroughly enjoyed. The six years as EO greatly increased his knowledge and understanding of the building industry, and helped him build many enduring relationships.

During this time, Robert, late in the evenings after work, also continued to manage the growing company that not only produced Remodeling Tips, but also found itself offering a wide variety of print and electronic marketing products. It finally came to the point where he had to choose between one or the other. He decided to go full-steam-ahead with his company, working to transform it into the full-service marketing firm it is today.

Specializing in the building industry, RT Marketing offers a wide range of services—everything from becoming a client’s ‘in-house’ full marketing department to producing your monthly e-newsletter.